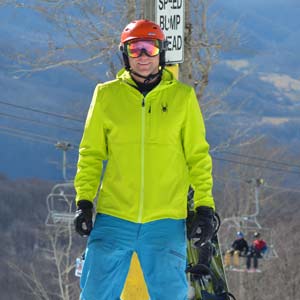 David grew up here in Pocahontas County in a little town called Hillsboro. He began skiing at Snowshoe when he was 4 and came up frequently with his family during the winter months. At age 15 he joined the ski team and then began teaching skiing at age 16. For nine ski seasons, he taught skiing part time through school. After graduating from WVU in December 2002, David moved to Snowshoe in January of 2004 where he took a job in Real Estate with Playground Destination Properties. During his tenure there, David was part of the sales team that broke 2 WV Real Estate records for sales volume in one day.

In May of 2007, David and his former college roommate at WVU started First Tracts Real Estate. David has helped many families from all over the east coast make their dream of owning a second home or investment property a reality.

In September of 2013 David married his beautiful and intelligent soul mate, Allison.  They now reside at the base of Snowshoe Mountain and are enjoying their life together:)

David's favorite hobbies include skiing, golfing, fishing, hunting, WVU football, and spending time with his family and friends. He looks forward to having the opportunity to work with you.